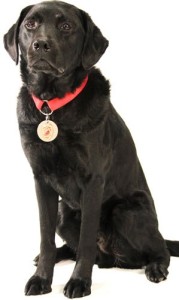 Tell me a little about your partner, Shazam. “Shazam is a 7 year old black Labrador retriever that was originally bred to be a Seeing Eye K-9. Unfortunately, Shazam was very hyper and had to have a “career change” when he was 9 months old. Shazam entered the accelerant detection canine school and was partnered up with me.”

What goes into training an Accelerant Detection K-9?   “Most accelerant detection K-9s are food reward canines. This means the canine must train to get fed. Shazam trains every day of the week by sniffing out hydrocarbons that have been carefully hidden in certain locations and on certain items. When Shazam smells the product, he alerts by sitting and is awarded with food. Shazam is hand fed when he trains and does not eat out of a bowl.”

What are the benefits of utilizing K-9s during fire scene investigations?   “One benefit is time. Canines can survey a large area in about half of the time it takes human investigators due to their superior olfactory senses. K-9s have been able to find additional evidence in other portions of fire scenes that an investigator may not know is involved. Containers that held ignitable liquids might have melted to the floor and be covered by debris, or carefully hidden behind other objects to prevent discovery. The K-9 is able to sniff out the odor and track it back to the source.”

Are there other benefits? “Yes, accuracy. Past history confirms that canine alerts yield a high probability that accelerants are present. This provides a more focused and efficient investigation. Although samples must be collected to confirm findings, the work of Shazam reduces time and cost.”

Is the testimony of a K-9 handler admissible in court? “Yes, the court does allow the K-9 handler to testify in court and provide demonstrations on how these specially trained canines operate. Certification, training records, and retraining are all weighing factors when determining admissibility.”

I noticed that Shazam has a metal on his collar. What does that signify? “That is actually just a badge, but he was nominated for an award when he helped solve a string of arson fires. Shazam identified critical evidence that was tied back to a suspect. This evidence caused the suspect to confess and this confession resulted in over 40 arrests for arson fires.”

On October 23rd, The Times-Picayune and The New Orleans Advocate published an article highlighting the U.S. Forensic organization and why it was … END_OF_DOCUMENT_TOKEN_TO_BE_REPLACED

Engineering Career Opportunities in Louisiana U.S. Forensic, a forensic engineering firm providing services throughout the U.S., has full-time and … END_OF_DOCUMENT_TOKEN_TO_BE_REPLACED