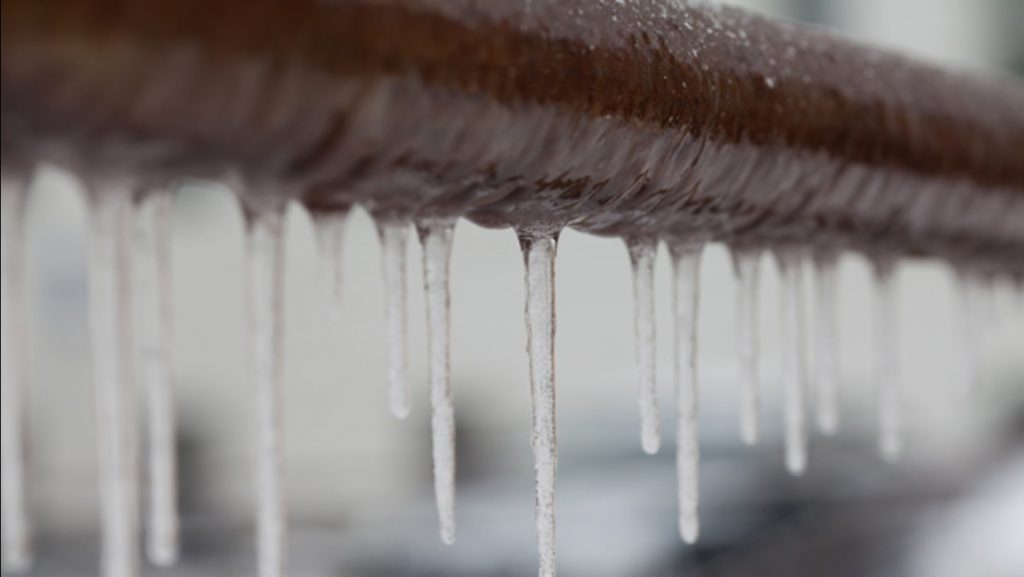 It was reported that a residential building in the Northeast was damaged due to frozen and burst water or heat pipes. We were retained to provide a weather analysis for the time period during which the damages reportedly occurred, and to provide opinions regarding whether or not the capacity of the heating system in the building was adequate to provide reasonable heat to the building, and whether or not reasonable heat was maintained in the building during the time period in question. Our work to complete this assignment was performed by Dennis Morrissey, P.E.

It was reported by the homeowner that between January 7th and January 10th of 2018 he was away on vacation. When he returned to the property on the 10th, he discovered that the boiler was not functioning. There were water leaks and water damage throughout the interior of the building. He stated that he maintains the programmable thermostat setting on hold at 67 degrees Fahrenheit throughout the winter season, and that when he was on vacation, the thermostat was set at 67 degrees Fahrenheit. Shortly before our inspection, he said that he noticed that the thermostat was not functioning properly due to dead batteries. He indicated that he replaced the batteries, but was unable to restore the thermostat to proper operation.

The homeowner reported that in November of 2017, 300 gallons of fuel oil were delivered to the property. No additional fuel oil deliveries were made to the property between November of 2017 and September 4, 2018, the date of our inspection.
The homeowner reported that since January 10, 2018 through the date of our inspection, the boiler remained off, and aside from replacing the batteries in the thermostat, no repairs or modifications were performed to the building.
We were provided with copies of utility bills for the property, including gas, water, and electric, during the periods that included January 10, 2018.

Weather information recorded at an airport located approximately 6 miles from the property, indicated that between December 1, 2017 and January 10, 2018, the average outside air temperatures recorded in the area were as indicated in the table below.

Date or Date Range Averages of Outside Air Temperature

The heating system at the property was a single-zone, 2-pipe low pressure steam system with cast-iron radiators and an oil-fired boiler. The net heat output of the boiler was 241,000 BTU/Hr. The steam pipes routed within the unheated basement area were insulated and the radiators were located appropriately to distribute the heat evenly throughout the living areas of the building. The physical evidence we observed and the heat loss calculations we performed indicated that the heating system in the building was adequate to provide reasonable heat to the building.

The owner reported that he maintained a thermostat setting of 67 degrees Fahrenheit in the building throughout the winter season. We performed heat loss calculations for the building for the period of December 1, 2017 and January 10, 2018, using available outside air temperature data and measurements and observations of the building characteristics made during our inspection of the building. We used the boiler efficiency values indicated on the boiler identification plate, and reasonable and commonly accepted values for the heat capacity of fuel oil, the heat conductivity of the building components, and air infiltration rates in the building. We ignored convective and radiant heat losses, which results in our calculations underestimating the amount of energy required to heat the building during the winter months. 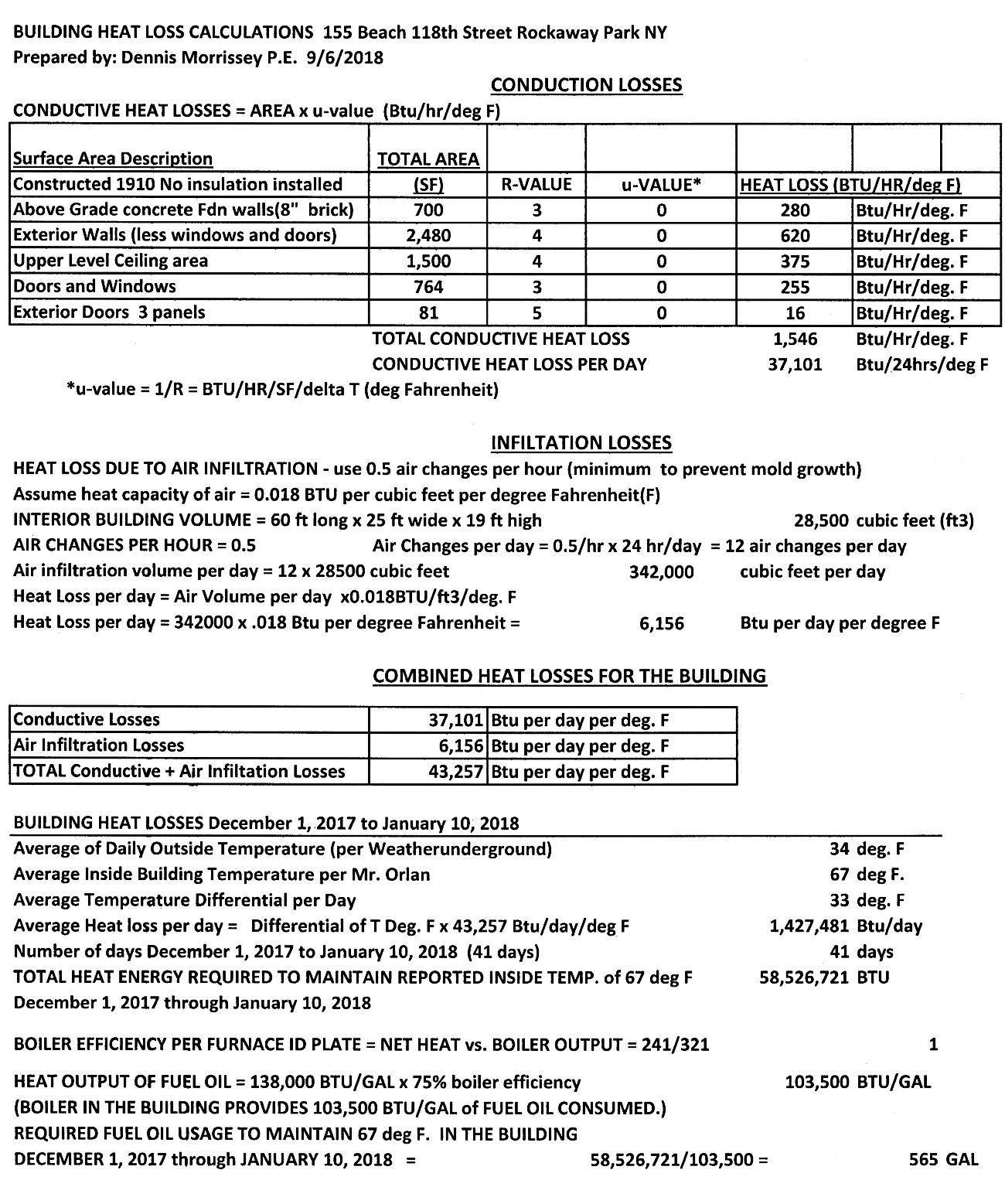 During our inspection, we measured the fuel oil level to be approximately 25 inches above the bottom of the underground storage tank. This reading, and the information reported by the homeowner, indicates that the maximum drop in fuel oil level in the tank from the date of the last fuel oil delivery in November of 2017 through January 10, 2018, was approximately 5 inches.

We were not provided with any information regarding the capacity or dimensions of the underground fuel tank at the property and we were not able to obtain the dimensions of the tank during our inspection. However, based upon the information provided by the homeowner that the maximum fuel oil delivery made to the property was 300 gallons, the measurements we performed at the property, the commonly available underground fuel oil storage tanks fabricated for installation at residential properties, combined with our experience regarding underground fuel oil tanks installed at residential properties, a reasonable presumption is that the tank at the property was a 330 gallon capacity tank installed in a horizontal position. For a 330 gallon tank installed horizontally, the applicable tank chart indicated that the maximum fuel oil consumption for a 5 inch drop in level is approximately 67 gallons. This fuel oil consumption is 207 gallons less than the fuel oil necessary to maintain an average temperature of 50 degrees Fahrenheit within the building.

We reviewed all commonly available fuel oil tanks fabricated for use at residential properties and the largest tank that might be reasonably assumed to be installed at the property is a 1000 gallon capacity tank. A fuel oil level drop from 30 inches to 25 inches for a 1000 gallon tank would correspond to a fuel oil consumption of 131 gallons, which is 143 gallons less than necessary to maintain a temperature of 50 degrees Fahrenheit within the building.

The physical evidence measured and observed at the property, the reported information, and the heat loss calculations performed indicated that reasonable heat was not maintained in the building between December 1, 2017 and January 10, 2018. 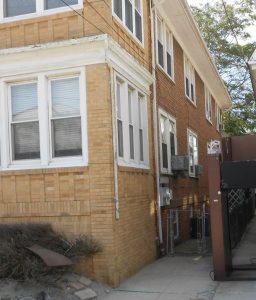 View of the north side of the building. 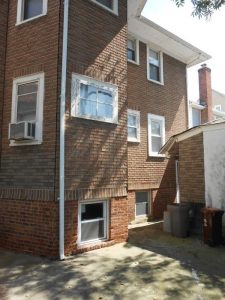 View of the rear (west) side of the building 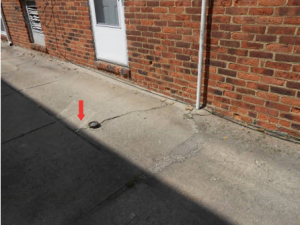 View of the driveway pavement adjacent to the south side of the central portion of the building. Note the fuel oil tank fill cap. 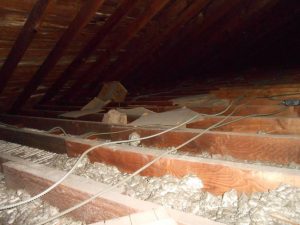 View within the attic area of the building. Note the nominal insulation installed within portions of the ceiling joist bays. 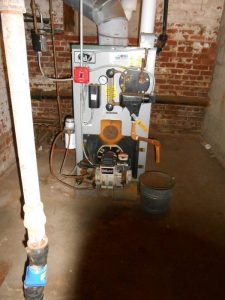 View of the steam boiler within the central portion of the south side of the basement area beneath the building. 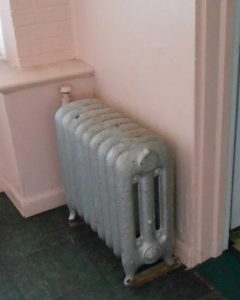 View of a typical cast-iron steam radiator within the living area of the building. 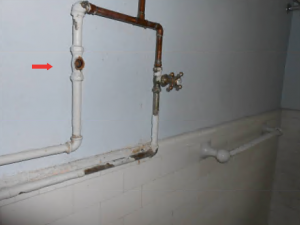 View of the broken water pipe valve housing within the bathroom in the central portion of the south side of the upper level of the building. 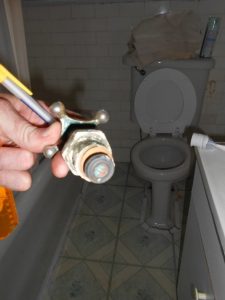 View of the broken valve stem.

On October 23rd, The Times-Picayune and The New Orleans Advocate published an article highlighting the U.S. Forensic organization and why it was … END_OF_DOCUMENT_TOKEN_TO_BE_REPLACED